Blog > Your Name in Elvish > Lynn in Elvish 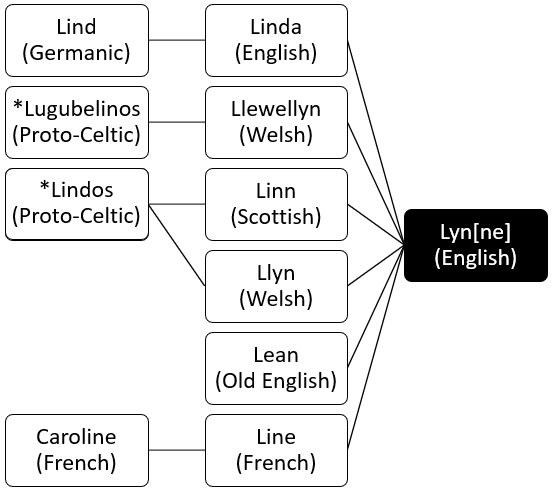 Lynn, your name is really cool! It has a ton of different sources.

It could be another version of Linda.

It could be derived from surnames that were based in place names, like Lyn (from Llyn – lake), Lynn (from Linn – pool under a waterfall), and Lynn (from Lean – reward, as in “land given as a reward”).

And lastly, it could be a diminutive (a cutesy version) of another name that ended in Lyn, but not really have a meaning on its own, like Lyn (from Llewellyn which means “Bright Belinos,” Belinos being the sun-god) and Lyn (from Caroline or Madeline, or any other name that ends in -line or -lyn).

All of these names have fused into one gender-neutral name that can be spelled a mountain of different ways: with an I instead of a Y, with one or two Ns, and with an E tagged onto the end to make it look French. These are all used interchangeably and considered to be the same name.

Which… is a problem if you’re trying to translate this name into Elven languages. When have I ever let that stop me?

I’m breaking down these translations this way:

First, it’s time for diminutives! In Quenya, they’re usually made with a suffix, but there are a few adjectives that can be used in place of names as well. These two words are from the same ancient root, and they both mean “little” – Nitya and Níca.

Second, words for bodies of water! Quenya have a few words that fit this mould. There’s Lóna, a deep pool or well fed by running water, which is a great match for the Welsh Llyn. Then there’s a vaguer word for still bodies of water, Linya. There are a few more specific words, like Ringwe – an icy pool in the mountains, and more abstract, like Nén – water. I think that Lóna and Linya fit our purposes best.

For the last one, we need to get a little creative. We don’t have a word for “reward.” Instead, I’ll make a compound with “Nan– back, re-, back in return” and “Anna – gift.”

For your Elf characters, the second option doesn’t really work. They didn’t give themselves or others the names of random objects. It’s just too vague. They’d combine the “pool” or “lake” with an adjective to tell how the person was like the pool or lake. The first option works – if the character is a small child. It’s too vague for an adult. The last option… well, it’d be possible in a case of Elf trafficking maybe? Naming someone “reward” just rubs me the wrong way, but if you have a plot explanation, it’d work.

So, let’s combine our bodies of water with some adjectives!

For the Gender-neutral names, use the adjectives with no suffixes.

Second, words for bodies of water. Our best bets are “Lîn – pool, mere,” “Ael – lake, pool,” and “Aelin – pool, mere.” We have a few other words like “Rim – cold mountain pool,” “Nên – water,” and many words for swamps, but Lîn, Ael, and Aelin fit best. Lîn also gets points for sounding a lot like the name that we are translating! You can use the nouns on their own as gender-neutral names, but I wouldn’t add anything to them, because these are highly irregular as names for people. We’ll discuss that more later on.

Lastly, the word for “reward.” Again, we don’t have a word for “reward” that Tolkien provided us with. But, we can easily make one. I’ll combine the elements “Dan– back, re-, back in return” with “Ann – gift.” These combine to make Danan. We won’t be adding any gendered elements to this name made from a compound word.

For your Middle-earth characters, only the “little one” names work, and they’d only be for babies or very small children. This kind of name is a place-holder name while you wait for the child’s personality to develop. As for the others, Elves don’t use random nouns for their names. Humans do, but they’re always abstract nouns, and these don’t have gendered suffixes, like “Andreth – Patience” and “Lalaith – Laughter.” Words like “reward” or “lake” just don’t fit Middle-earth naming conventions.

The only time words for places are used as names for people is when telling you where the person comes from. This could be a nickname, or if the character was found in such a place while young and their origins are otherwise unknown, like what happened to Elrond “Star-cave” and Elros “Star-mist.” They were found by themselves in a small cave by a waterfall. Even these, however, aren’t just plain words for a place, they’re compounds. The El– in their name is a pun for “star/elf” because they were elven children.

So, let’s add a word for a person to the words for pools.

Lynn, I hope that you found this article interesting and useful!