Blog > Your Name in Elvish > Timothy in Elvish 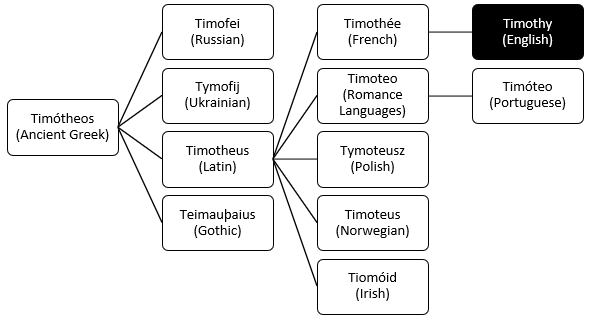 The “Honour” part is a verb, so we’ll make that into an agental noun (honourer/one who honours) to make it fit with Elven name-structures.

The Theos part here is referring to the Christian god, so we have two approaches to the translation:

The verb for “to honour, praise, bless” in Quenya is Laita. To make it “honourer,” we have a few suffixes that we can add to make feminine, masculine, and gender neutral ones who do the honouring.

For the translation of God, we have the word “Aino – a holy one” and “Vala – a power.” We’ll use Eru as a short version of Eru Ilúvatar.

When it comes to using this name for your Role-play and fanfiction elves, these names are surprising fine. These names tell you how the person with the name relates to the deity and doesn’t try to impersonate a god. Therefore, these are perfectly useable Elven names.

The word in Sindarin for “to glorify, praise” is Egleria. This would make names that are 6 syllables long, and in Sindarin, they rarely are more than 4 syllables long. We can break it down into the noun that Egleria is based on instead, Aglar – Glory. This means that the Sindarin versions of this name will mean “God Glory.”

The Sindarin words for deities are “Aenor – holy one” and “Balan – powerful one.” We can also use Eru in Sindarin.

For a name of a character of Middle-earth… I have conflicting feelings about these. “God Glory” could mean that you glorify the god, but also that you have the glory of that god. That sounds really conceited and borderline impersonation of a deity. But, if that’s the personality of the character you’re playing, go for it. Otherwise, I’d go back to my preferred translations of this: “Lover/Servant of [the] God.”

For “lover” I’m using Dîl, which a word for someone who has a fascination with or interest in something, not affection or romance. For “servant” I’ll use Bŷr.

Timothy, I hope that you found this article interesting and useful!