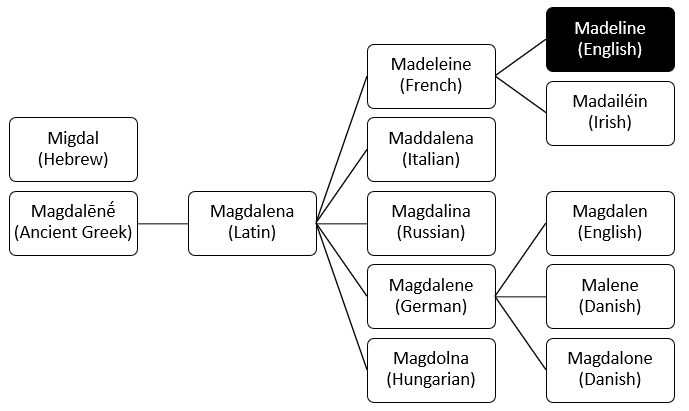 Madeline, your name is really cool! It’s from the Ancient Greek word meaning “of/from Magdala.” It was used as an epithet for one of the many Biblical characters named Mary, and started to become used as a name on its own after the translation into Latin. Magdala itself is the Ancient Greek version of the name of a village called Migdal on the shore of Lake Galilee. Migdal means “tower.”

“Migdal” is super pronounceable for a Sindarin-speaking Elf. No change needed there. We’ll add a patronymic name suffix meaning “daughter of…” to indicate origin in Migdal, and use nouns like “child – Hên” and “daughter – Sell” as well.

Sindarin has two words for “tower” – Barad and Minas. We’ll add Hên, Sell, and –iel to them too.

Daughter of the Tower: Minassiel and Baradiel.

For your Middle-earth characters, while Migdal sounds like it could be a word in Sindarin, it isn’t one. I’d go with the names based on “tower” for your characters instead. This name sounds like a Father-name, an early one given to a baby. This sort of name is a public name, used by strangers and acquaintances. It’s polite to refer to someone by their Father-name if you don’t know them very well.

“Migdal” is extremely un-pronounceable to a Quenya-speaking Elf. I think it’d become *Mihtal. We can add “child – Hína” or “daughter of –iel” to the end of it to make a patronymic styled name.

There are three words for “tower” in Quenya: Marto, Minasse, and Taras. We’ll add the patronymic suffixes to it as well.

For your Elven characters, *Mihtal is a nonsense word. Stick with the “tower” translations instead. A good backstory for a character with the name “daughter of the tower” would be that she was found lost or abandoned in a tower, like how Elrond and Elros were named for where they were found.

Madeline, I hope that you found this article interesting and useful!