Blog > Your Name in Elvish > Charles in Elvish 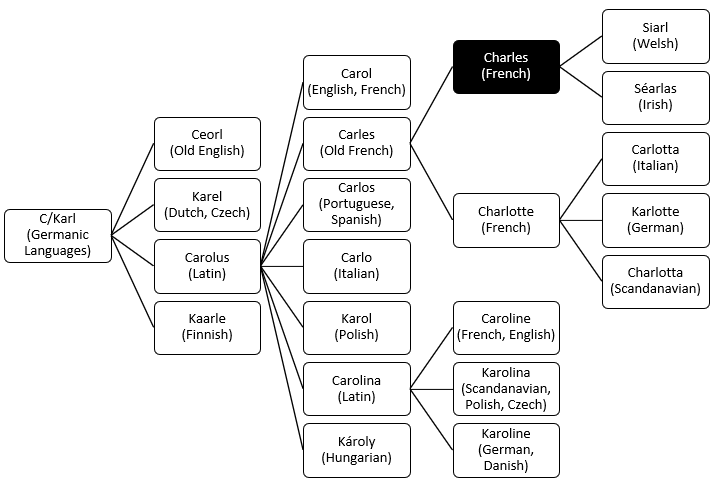 Charles, your name is really cool! It’s an old Germanic name meaning “Free Person.” It’s been a popular name for men and women for over a thousand years, basically ever since the Frankish king Charlemagne reigned. I included feminine versions of the name because they’ve developed in fascinating ways right alongside it.

Let’s dig into what a Ceorl was a little deeper, since this will affect how we translate it. In ancient Germanic tribes, like the Angla and the Saxons, there was a hierarchy. Below the Ceorls are the Thralls, the slaves at the bottom of their society. And above them are the Thanes, which are minor nobles who answer to the King, like a Baron or Baronesse. This means that a Ceorl is a commoner who isn’t a slave or a servant, but not nobility either. The Frankish kings probably took this as a name to connect to the everyman, since in Germanic tribes, charisma mattered more than bloodlines.

In some languages, because of the association with Frankish kings, cognates and borrowings of Charles became a word for “king.”

So, when translating this into Elven languages, I will do two translations: King/Queen, and Free Man/Woman.

With Masculine name suffix or noun, it’s: Leinor or Leindir.

We can also make it gender neutral by using the word Pen “person” in place of the usual suffixes: Leiphen.

The Sindarin word for “ruler” is Taur, for “king” is Aran, and for “queen” is Bereth. Rían can be used as a poetic way to say “queen” as well.

As names for your Elves in Middle-earth, the “Free Man/Woman” names work great. The rest read more like a title than a personal name, except for Rían since it means “crown-gift.”

The Quenya word for “free” is Léra. There are a few words that mean “free,” but this one is connected to the verb meaning “to be free to act” and is used to describe people with agency only.

As a feminine name: Lére and Léranis.

As a gender-neutral name: Léraquen.

The Quenya word for “ruler” is Tár, for “king” is Táru or Aran, and for Queen is Tári.

For your Elven characters, the names based on Léra work great. The others would only be used as titles as they are on their own, so I wouldn’t make the personal name of a character any of those.

Charles, I hope that you found this article interesting and useful!