Blog > Your Name in Elvish > Amy in Elvish 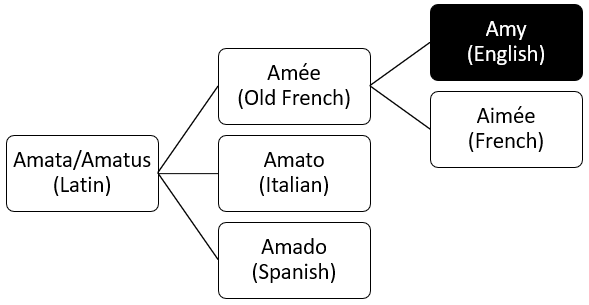 Amy, your name is really cool! It’s an old Latin name meaning “beloved.” When it came to French, they made it their own form of passive participle, which is why their version seems so different from its ancestor.

Translating this into Elven languages will be fairly straightforward. Elven names are often made from an adjective with a gendered name suffix or noun added.

There are a few words meaning “beloved”: Melda, Melin, and Moina.

Melda and Melin are both based on the verb Mel-. In the upcoming publication The Nature of Middle-earth, Tolkien fleshed out the Elven concept of “love” in greater detail than we’ve ever seen before. He describes Melme (the noun version of the verb Mel-) as being a very deep and intimate love, something that occurs between souls. Sexual love was a separate concept, Yerme, and you can’t have Yerme without mutual Melme, but you could have Melme without Yerme. In our modern terms, we’d probably call Melme “intimate, platonic love.”

Melda and Melin may be describing what if felt towards the object of affection, but Moina describing how you’re showing it. It means “familiar, dear” and is connected to the word Moica “soft, gentle.”

So, choose the word that you feel better works for you.

For a gender-neutral name, you can use the adjectives without any suffixes added.

I should note as well that Melde and Meldo are also used as gendered words for “friend,” the sort of friendship that has Melme.

These are perfect names for your Elven Role Play characters. As I mentioned before, these are structured just how an elven name is made. Though, this is the sort of name that you’d give as a nickname or endearment to someone you care about, not a personal name or father name.

For gender-neutral names you can use Sindarin adjectives on their own, but it’s a bit rarer than in Quenya. I’m adding the word Pen “person”: Melben and Muiphen.

And look! We accidentally made another word for “friend.”

As with Quenya, these are great names for your Middle-earth characters. I could see it being used as a term of endearment between intimate friends or family members.

Amy, I hope that you found this article interesting and useful!