Blog > Your Name in Elvish > Julia in Elvish 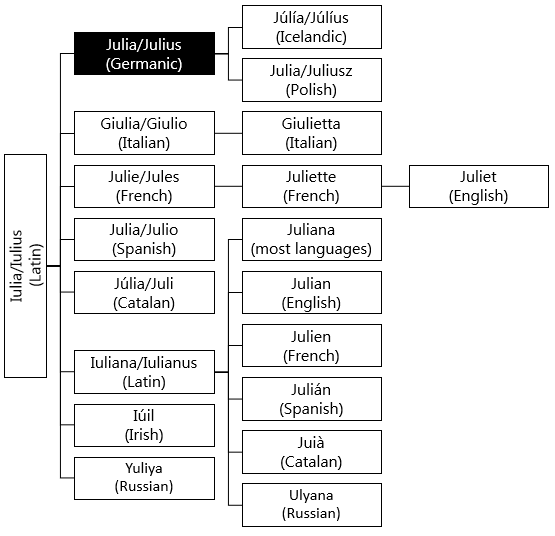 Julia, your name is really cool! It’s an ancient Roman family name meaning “Descended from Jupiter.” Because it was a family name, Julia and Julius were considered to be the same name, and I’ve included masculine versions.

This is a name within a name, so we’ll take three approaches to translating it.

Thus, I will translate this name as “Son/Daughter/Child of Sky/Iovis/Manwë.”

Let’s tackle the Quenya-ization of “Iov” first. As I mentioned before, the V is pronounced as a W here, and the I is pronounced more like a Quenya Y. Tracing Quenya’s phonetic development, this would make the word *Yó, with the form used in with suffixes *Yow– (or *Yov– in Exilic Quenya.)

The word for “sky” in Quenya is Helle or Wilya (Vilya in Exilic Quenya). Wilya also means “air.”

And lastly, we’ll use Manwë, since it’s already in Quenya.

Then we’ll add suffixes meaning “daughter of” –iel, “son of” –ion, and the word meaning “child” Hína to the end.

For your elven characters…. None of these work as names. Yó means “both,” so at best it sounds like you’re referring to two children. The “Daughter/Son/Child of the Sky/Manwë” names, while they sound cool to us, mean something very different to the Elves. To them, these would mean that you are a creature created by Manwë. We have similar names for humans, Elves (Eruhíni – Children of Eru Ilúvatar) and Dwarves (Auleonnar – Children of Aulë). Basically, it’s like naming someone “Human Being.” The only time that racial names like this are used for individuals is if that individual is the odd one out, like how Aragorn was called Dúnadan while being the only human of Númenórean descent living amongst Elves in Rivendell. But, no elf would be called Manwehína, because Elves are Eruhíni. Maybe they would call their eagle friend that as a nickname.

If you want a name that’s a little more poetic and personal, I suggest “Sky-Gazer.” This way your character isn’t doing the taboo of pretending to be a god, but still having something to do with the Sky-God they like.

The Sindarin-ization of “iov” is *Iaw and *Ió in compound words. This is a homonym with Iaw “corn,” which does make for strange names.

The Sindar had two ways to refer to Manwë. One of them is just the borrowed Quenya word. The other is Aran Einior “the Elder King.” This one can’t be combined into a compound, so we won’t use it.

As with the Quenya names, none of these work in Middle-earth for the same reasons. Like with Quenya, we can make “friend/student of Manwe” Manwenil and “loyal follower of Manwe” Manwevor.

We can also do “Sky-watcher”: Gwilithdirn and Gwilwendirn (All gender-neutral)

But what’s really fun is that in Sindarin names, talking about the glint in one’s eyes is a common theme, as in Maeglin “Sharp Gleam [in his eyes]”. So, instead of “Sky-watcher”, how about “Sky-Gleam [in your character’s eyes]”, since the sky would be reflected in their eyes.

Julia, I hope that you found this article interesting and useful!