Blog > Your Name in Elvish > Dennis in Elvish 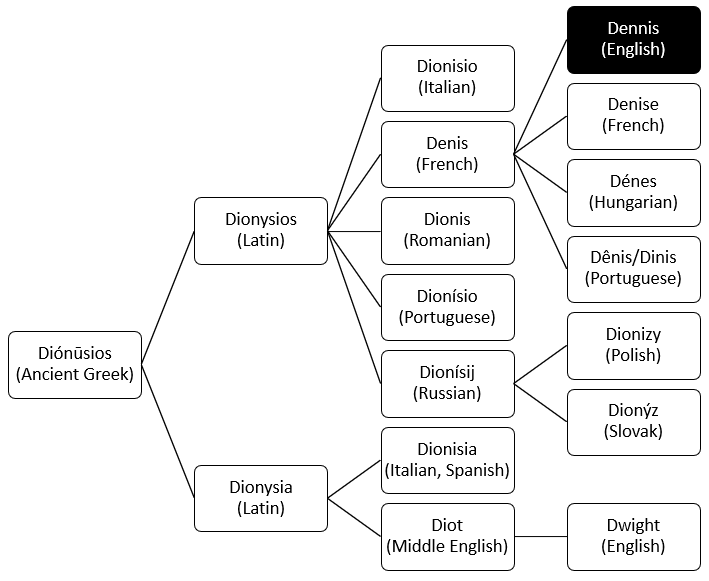 Dennis, your name is really cool! It’s an ancient Greek name that means “the Zeus of Nysa.” Nysa was a forested land of nymphs where Dionysios was raised. Zeus was his father, which is why he was named after him, much the way that Finwë’s descendants include “Fin” in their names.

This is one of those “name within a name” problems that I often talk about in these articles, just doubled.  When we have a name within a name, we have two options: we can leave it untranslated, or we can translate the inner-name’s meaning as well. When we have deities, we also have the option of replacing the deity’s name with a cultural equivalent deity.

Let’s start with Dionysios himself. Let’s look at a broad description of Dionysios’s godly realms: drunkenness, madness, youth, wine, and parties. The closest of the Valar to Dionysios is Nessa who appears to be the goddess of frolicking gayly through the forest, a trail of deer following her. Her name also literally means “young.”

Next, let’s tackle Zeus. His cultural equivalent is Manwë, the Vala who is the Elven sky god. Zeus’s name is just the word “sky.”

Nysa is a place name based on a word for “tree,” and a tree-land is a forest, so when I translate it, I’ll translate it as “forest.”

So, for each of these I will do four translations.

When it comes to naming your Middle-earth characters, only the names meaning “sky forest” make any sense. The rest might as well be a squawking hen. Most importantly, Elves never give themselves the names of gods. To them, it’d be impersonating a god, which is pretty taboo. If you want to have your character be a disciple of Nessa, I’d suggest something like Nethnil (someone interested in or fascinated by Nessa) or Nethvyr (servant of Nessa).

Like the Sindarin versions, only the 4th set of names make any sense as the names of Elves. If you really want your character to have an homage to Nessa, I suggest Nessandil “one interested in or fascinated by Nessa” or Nessandur “servant of Nessa.”

Dennis, I hope that you found this article interesting and useful!