Blog > Your Name in Elvish > Christopher in Elvish 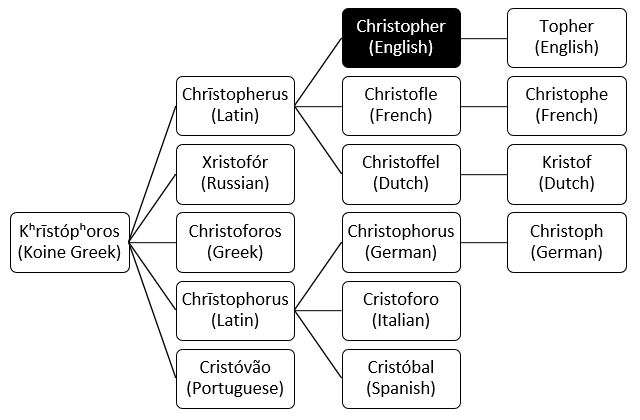 Christopher, your name is really cool! It’s an ancient Greek name, describing and therefore naming a Saint, one who carried baby Christ across water. It literally means “Christ-bearing.” Tolkien liked this name, and gave the name to his son who went on to make sure the world knew the true depths of his father’s creation.

Translating this name has the complication of having a name within the name. This means we have two options – Translate the name, or leave it untranslated and just bring it into the target language’s phonology.

The name Christ means “anointed one.” This refers to a ceremony found around the Mediterranean where sacred oil was dripped or poured on the head of someone being made a ruler. Elves have no ceremony like this, and a name referring to the oil would end up as “oily head” and definitely not have the same significance and meaning that the original intended. Instead I’ll translate this as “Ruler/King,” since “anointed one” was just a poetic way to call someone “King.”

Tolkien helps us out with this one since he loved translating various Catholic prayers into Quenya. He made a Quenya-ized version of Christos – Hristo.

If we want “Christos” translated, then we have a couple options of words for rulers and kings. They are “Tár – ruler” and “Aran – king.”

Next, we need a word for “bearer.” We’ll have to take the verb “Col– to bear/carry/wear” and make it into an agental noun (a noun for an agent or person who does the action) with a couple agental suffixes. With these, we get a masculine noun Colindo and a feminine noun Colisse.

If you want to use the Quenya version of your name for a character, the versions that have Tár and Aran would work great in an Arda context, and honestly are quite badass. The ones with Hristo don’t work since it’s not a Quenya word.

We don’t have a Tolkien-provided Sindarin version of Christos, but we can make one the same way that Tolkien made the Quenya one. Tolkien started with the Ancient Greek Kʰrīstós. He chopped of the case ending, replaced it with a masculine agental suffix and treated it like an ancient Common Eldarin root word. If we start in the same place for the Sindarin version we get:  kʰrīstō > kʰristō > kʰristo > xristo > xrist > Rhist.

Sindarin words for “king” are Aran and Taur.

Unfortunately, if you wanted to get through this without fan-made vocabulary, you’re out of luck. Tolkien made a few Sindarin derivatives for the ancient root √KOL, but the verb “to bear, carry, wear” wasn’t one of them. Luckily, it’s one of the safest fan-coined words we can make, because we know the that Kol– would become *Col– in Sindarin, not changing in pronunciation at all. Adding an agental suffix to *Col– gets us gender neutral *Color, masculine *Colron and *Coldir, and feminine *Celril and *Coldis.

When using these for your Middle-earth RP and fanfic characters, you can use all of them except the ones based on Rhist, since it’s not a Sindarin word and makes the name not make sense.

Christopher, I hope you found this article interesting and helpful!