Blog > Your Name in Elvish > Elizabeth in Elvish 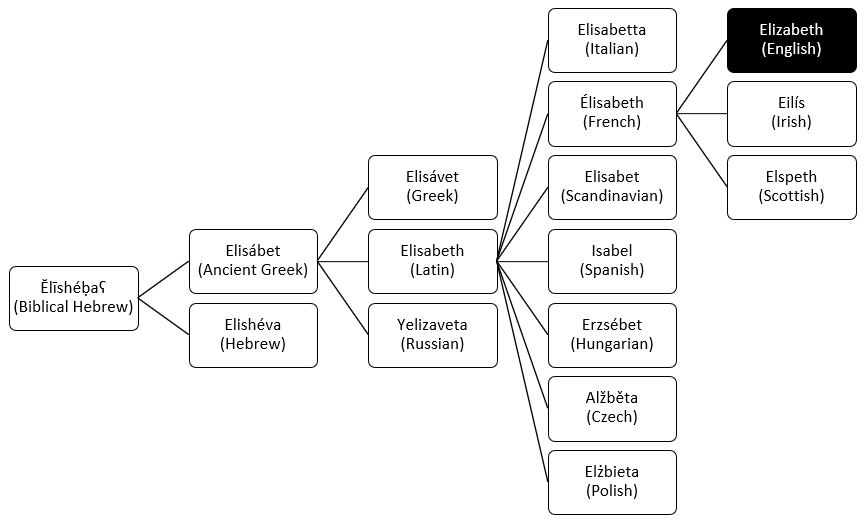 Elizabeth, your name is really cool! It’s an old Hebrew name that has spread all across Europe. It’s likely a play on words, because the root of the second word, SH-B-ʕ, could be read as “oath, bond” or “seven.” The word for “seven – sheva” being very close to the word “abundance – shefa,” making it a pun. Seven is also a sacred number, referencing “abundance, perfection, completeness.” This is why when you look it up, you’ll find it translated to English as both “my god is an oath” and “my god is abundance.” It’s my opinion that the dual meaning is intentional.

So. Puns. How do you translate a pun into another completely unrelated language? How do you capture this complex web of cultural references in an alien culture? The truth is, we often can’t. This cool name is going to lose some information when translated. We need an entire paragraph of explanations, frack, to do it properly, we’d need an article and debate on it to cover every flavor, every meaning wound up in this name. When you see a translation, any translation, keep this in mind. Translation means that some information will be lost or gained, pretty much every time. No matter how good the translation, no matter how careful the translator. Nothing ever means the same exact thing every time it is said and heard.

Approaching this translation into Elven languages, we have two main problems. How to translate “El” (the “god” referenced above), and how to get the meaning of the sentence into languages that don’t have sentences in names.

In this case, I’m going to say that this time the word “El” isn’t being used as a shortened “El Elyon” which means “the highest god,” the name of the god of Abraham. Instead, it’s being used as the noun, “a god.” This simplifies the translation into Elven languages a lot. I’ll use words for “deity” in the Elven languages.

Elvish languages just don’t have sentences in their names. Instead, I’ll structure the names as “Deity Oath [name suffix]” and “Deity Abundance [name suffix].” It’s losing a lot of information, but I can’t include the possessive pronouns, so we’re stuck with these weak approximations.

There are two words for “oath,” Gwest and Gwedhed.

For “abundance” there are two words, Orvas and Maelig.

I don’t suggest adding a name suffix, since in Sindarin a name made from a compound word sounds like a patronymic. Thus, these are all gender-neutral.

For your Middle-earth characters, I’d suggest tweaking the name slightly. Instead of Balan or Aenor, I’d use just “Aen – holy.” I wouldn’t use “abundance”, since that’s nonsensical, but “Holy Oath” sounds like a nickname for someone who made such an oath.

The Quenya words for “deity” are Vala and Ainu-.

The words for “oath” are Vére and Vanda.

The word for “abundance” is Úme.

For your Elven characters, these names are pretty nonsensical. Like with Sindarin, I’d drop the “abundance” names and make the name “Holy Oath” instead, using the adjective Aina.

Elizabeth, I hope that you found this article interesting and useful!