Blog > Your Name in Elvish > Catherine/Katherine in Elvish 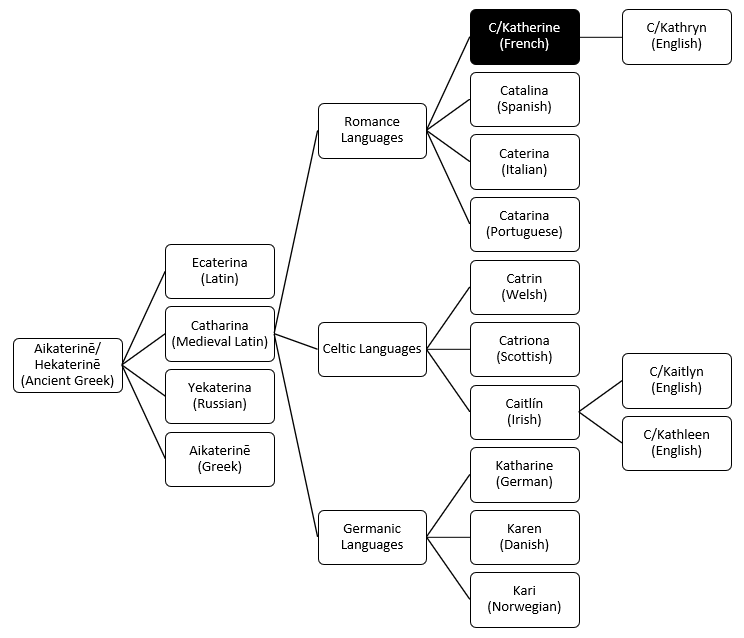 Catherine, your name is really cool! It’s an ancient and mysterious name from Ancient Greek, a name so ancient that the Greeks themselves didn’t know what it originally meant! Later on, it was reassigned the meaning “Pure/Clean/Clear,” based on connecting the Ancient Greek word Katharos. They changed the spelling to reflect that meaning. One slightly more convincing guess is basing the name on “Hekateros” meaning “Each Singly, Either, Both, Each of the two.” Combined with the name suffix, this version likely refers to someone born as a twin. People have connected the name to Hekate as well, a Greek goddess of magic, but the connection is pretty weak.

When it comes to translating this name, I’ll use “pure” and “twin/twin-born” as the source of the translation. Of course, since this name’s meaning is so ancient and murky, you can scrap all of these and go find a meaning that you want instead.

Let’s start with “Twinborn,” the easier of the translations. The adjective in Sindarin is Gwanun. Adding feminine name suffixes makes: Gwanúneth, Gwanúnel, and Gwenúnil. The noun for “a twin” is Gwanunig.

For “pure,” it’s pretty complex.  The Greek word has 3 different connotations: (spiritually) Pure, Clean, and Clear (transparent, for things like water). Sindarin has words for “clean – Puig” and for “clear – Lim”. The word for “pure” will be a bit more difficult, and we’ll have to use a fanmade word, “*Maun – morally good, unmarred, free of evil.” This word is based on the place name Avon (Sindarin cognate of Aman) and the ancient root √MAN of the same meaning.

For your characters in Middle-earth, all of these names are great. The Twinborn/Twin names sound like a name given to babies before they have other names – the sort of name that would be quickly replaced with a more descriptive name.

Starting with “Twinborn.” The Quenya adjective is Onóna. We can add a feminine name suffix to make Onóne.

Like with Sindarin, “pure” is more complex, and has more choices. We have two of the meanings in Quenya: Poica – clean and Mane – morally good, unmarred, free of evil. For “clear” we have to dip into an earlier version of Quenya to get *Liquistea. I decided that this was acceptable because it mirrors the development of the Sindarin Lim, making it a likely cognate for Lim.

Adding feminine name suffixes gets us: Poice, Manie, and Liquistie.

As for naming your RP and fanfic characters, all of these are fine names for elves. The “twinborn” names wouldn’t be found on an adult, only on a baby or child before they had a “real” name.

Catherine, I hope you found this article interesting and informative!