Blog > Your Name in Elvish > John in Elvish 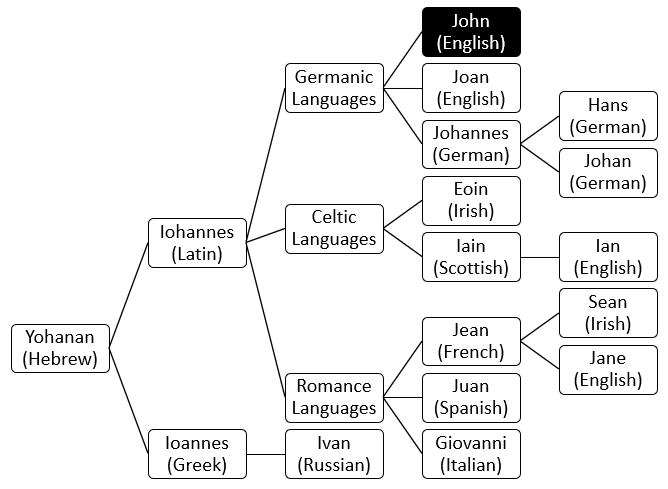 John, your name is really cool! The Abrahamic religions imported it all over the place, meaning that many names that you never considered to be the same name might be yet another a version of Yohanan. The graphic represents only a tiny fraction of the variants of this name, not to mention that many of these have explicitly feminine versions like Jeanne, Joann, and Ivana.

Yohanan comes from a common phrase, “YHWH has been generous/gracious/merciful.” Basically, an ancient “#soblessed.” The “Yo” part comes from an ancient reading of the Tetragrammaton “Yeho” (as in Jehova) and the Hanan part is from the root H-N-N, which means “Favor” or “Grace”, which yes, is the basis for the name Hannah as well!

Here comes the hard part. Yohanan is structured in a way that is very, very different from Elven names; it has a name within a name, and that name is the name of a deity. I already discussed this problem at length here: Challenges in Translating Names from Our World.

We can’t make a phrase into a name in Quenya, since names in Quenya are strictly made of nouns and adjectives. Even if you have a verb in the name, it’ll be a participle (verb acting as an adjective) or nominalized (turned into a noun). So, this name will be just the “Yo” part with a noun meaning “grace” following it. But, if you’re curious about what the phrase version of it would be, it’s “Yé mána ma!”

We can translate the “Yo” with an Elven cultural rough equivalent: Eru; we can use the guessed meaning of “I am that I am” and make it “eala – being, existing one;” and lastly, we could leave that part untranslated and use the Quenya pronunciation of the first letter of the Tetragrammaton, Ya.

The second part is fairly simple, since Tolkien helped us out by translating a bunch of Catholic prayers into Quenya. He approached the idea two ways – “lisse – sweetness, grace, favor” and “anna – gift.”

If you want to use this name in RP or fanfic, there’s a problem. Even if it’s in the form of a Quenya name, it’s really nothing like an Elven name. No elf would name themselves “Eru’s/Ya’s Grace”, and “Being’s Grace” is just kinda non-sensical. Instead, I’d go with a name meaning “Blessed One.” This wouldn’t be a name that a person chose for themselves, but an Anesse – either an Epesse (nickname) or an Amilesse (Mother-name). We have a few words for “blessed” with different connotations. Ainima is for something made holy; Almárea is for someone fortunate; Herenya is for someone wealthy, Alya is for someone who is thriving, and Manaite is for someone who has grace.

Like with Quenya, we’ll have to make substantial changes to this name to make it work. The translation of the “Yo” could be Eru, “Nas – being,” or the Sindarin version of the first letter of the Tetragrammaton “Ia.”

For “Grace” we can translate it with the cognates of the Quenya words, “Glî – honey, sweetness” and “Ann – Gift.”

Like with the Quenya, these names don’t work for characters in a Middle-earth setting. So, going on the theme of “Blessed,” here are a few adjectives we could use: Alwed – fortunate and Eliannen – blessed/helped.

Add these to a masculine name suffix, making: Alwedon and Eliannenor.

John, I hope you like this article and found something helpful or interesting in it.