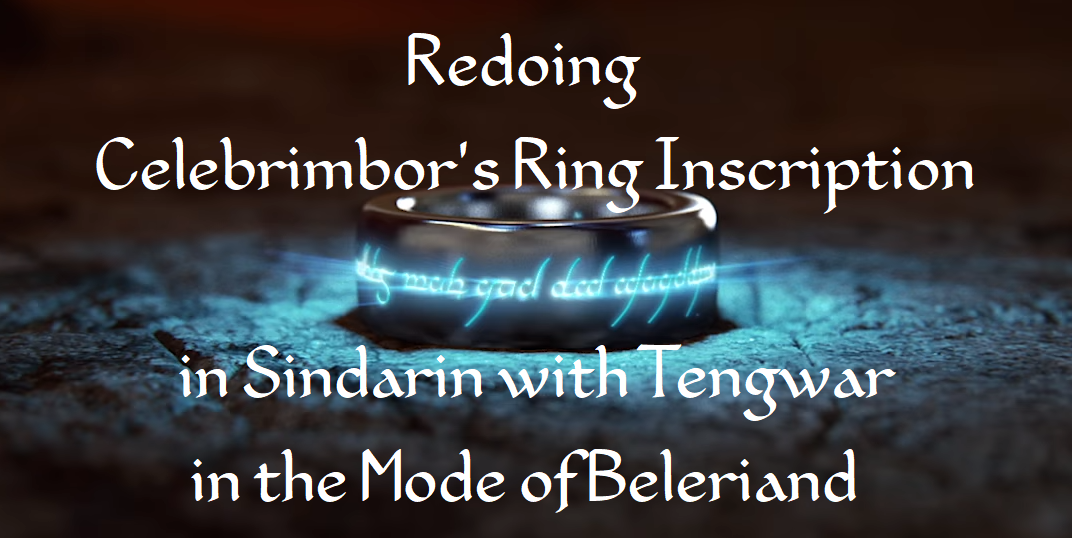 Let’s face it. The game developers could really have used a Tolkien-language expert on their staff. I’m going to explain how they messed up, and fix it for them.

First off, let’s go back to the 90’s, when Tolkien-language fans were trying to find ways to write in Tengwar on their computers. It wasn’t easy. Most computers at the time would only recognize a couple hundred characters. They couldn’t just add new characters as they wished. So, they found a simple hack – just replace the images that the characters represented with a special font! It really is a brilliant solution. There’s just one problem.

Tengwar to the Latin Alphabet does NOT have a one-to-one equivalency.

Things that are digraphs (two letters combined to make a new sound) in the Latin alphabet are single characters in Tengwar. A voiceless TH is written with the Tengwa þúle, and there aren’t any “TH” keys on the keyboard. And, some digraphs are written multiple ways. Take CH, for example. It’s written with 4 different tengwar, because CH is pronounced 4 different ways: change, machine, chemical, loch.

Faced with this problem, the fans abandoned making the tengwar and the images of the letters they were replacing remotely related. Instead, they looked at the keyboard as a graph full of empty slots they could fill. They took the Tengwar chart with its four columns, flipped it on its side, and filled the keyboard.

Then the LotR movies came out, and people saw these “Elvish Fonts.” You typed, and it looked all elvish and stuff!! But, they were typing not knowing about the clever hacks that the font developers had done. Those of us who know Tengwar call this the “Mode of Baloneyland.”

And alas, the game-developers fell into this trap. Someone downloaded the Tengwar Annatar font, didn’t read the documentation which explains all of this in detail, did the art, and congratulated themselves for their “translation.”

So, I’ve redone it for us. I first translated the poem into Sindarin, then I transliterated it into Tengwar. If you copy and paste the poem, you’ll see what I had to type to get the correct transliteration.

Awarthon Avon,
I abandon Aman,
I renounce the Blessed Realm,

An nathad Vordor,
For saving Mordor,
To redeem the Land of Shadow,

Sevidh galad al-thinnassen.
You [plural] have light un-waned. (Thinna is also the word for the light turning grey as the sun sets)
You shall have light undiminished.

Ilphen telir ni ñostad a gellad1.
Everyone will come to fear me and to rejoice.
All shall fear me and rejoice.

1. Gella- to rejoice, to make a triumphant shout. Based on vGJEL and the verb-stem augmenting suffix -TA.