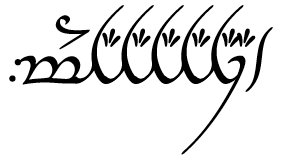 Have you ever seen someone unfamiliar with the Latin alphabet trying to write it? It can end up pretty awkward and hard to read, even if they are a great artist. They just don’t know how to differentiate the symbols from each other, where they can elaborate, or even how they’re written. So, here’s a basic guide covering the things you need to pay attention to as you copy the text.

First, let’s define some terms. A “Tengwa” is a letter, usually a consonant. Vowels are usually written as marks above and below the Tengwa. The plural is “Tengwar”.

A Tengwar text has 3 parts:

The blue bars show where the center of the line of tengwar is, where you will need to line up the tengwar.

Lúvar have 8 distinct shapes. They can be single or double; open or closed; right or left of their telcor. They always go in the centre, between the blue lines in the telcor picture above. Here they are with the shortest telco. I’ve made the telcor grey, so you can see the difference between them.

As you can see, you can’t double a lúva without changing the letter, and if you connect the lúvar in the wrong place, you could make the letter into a different one, like the difference between a b and an h.

The tengwar that throw the rules out of the window:

But they still line up on the center line. When you copy them, you have to make sure they line up properly! The height, direction, and length of the tengwar matters a lot.

These are the numbers, from 0 to 11. They also use telcor and lúvar, and they line up on the center line.

They are placed either above or below the tengwar. Try to center the tehtar on the tengwar if you can. Here is the tehta for A, put over a variety of tengwar:

Some tehtar can be piled on top of each other. Here is an A-tehta stacked on top of an N-tehta. The bar-shaped tehtar need to be as wide as the tengwar they are on.

When differentiating the tehtar, the number of dots is important! Adding dots may look cool in Latin scripts, but in Tengwar, they have meaning! Here are the tehtar for I, Y, and A:

Dots and Slashes shouldn’t be mixed up either. Compare the tehta for the I and the E:

Some tehtar go underneath the tengwar. Bar-tehtar spread to be the length of the tengwa. They never touch the lúvar, so there should be a little space between them. If it’s too close, it could be misread as a closed lúva instead of an open lúva. When dealing with the Lambe or Alda tengwar, tehtar that go under tengwar go inside them instead. Here I’m using the tehtar for the silent E, the consonant doubler, and the Y-tehta. These are the most common ones.

You can’t add “monkey tails” onto tengwar as flourishes, because those would be read as the S-tehta. Here are some examples of it in action:

And those are the important ones. If you’re having a hard time telling what length a telco is or something of that nature, contact an Elvish expert. I have a list of resources about Tengwar writing systems here: Trustworthy Websites – About Writing Systems and you can contact me, Fiona J., if you have questions on this topic. Translation/transcription checks are free!

Good luck! I wish you many successful inscriptions and many happy customers!